19,392 of us gathered on Sunday to run. Strangers coming together, becoming friends, sharing an experience that we will live with for the rest of our lives. We all ran together, one after another, down streets of magic and energy surrounded by those who understand us the best, half marathoners.

There is something magical about running down the streets of Manhattan. Maybe it’s the fact that we are running in the footsteps of professionals and marathon winners, maybe it’s the excitement that the city brings and the promise of a great experience. Whatever it I keep being drawn back to run races in the city over and over again.

We arrived to the city on Saturday taking the train in, I was super excited to get to the hotel because it was the first time I would be able to look over the ENTIRE central park. We stayed at the Park Lane Hotel on the 39th floor and let me tell you, it was super cool. I have never been that high up in a hotel and to be able to see the park and over the city, I was awestruck. I’ve never appreciated how tall the buildings actually are, they have their own weather systems! It was raining at ground level but out our window there was a blizzard!!!

After we dropped my bag in the hotel (I suck at packing and had to take a suitcase), we took a taxi down to the half marathon center to pick up my bib which was super easy this year. There was not as many vendors as last year, which kind of disappointed me, but it made the crowd inside less.

We stumbled around downtown for a while checking out a couple markets, getting lunch and dropping a hefty chunk of change at the Patagonia store. It was snowing/raining and my fear that the weather did not change from the potential 1-3 inches was coming to the forefront. I really did not feel like running in snow. I brought enough clothes, but I would have preferred to bring snow specific running clothes.

We had reservations at Carmiens. For those of you that do not know what Carmines is, it’s a family style Italian restaurant whose portions serve 3-4… so perfect for the two of us. To start we had calamari, and then straight to the main course of chicken parm, my true pre-race staple. It was huge. The biggest chicken breasts I had ever seen, and there was two of them!! And don’t forget the pound of pasta it rested on. We ate so much I thought I would burst, and there was still half a platter left. We got leftovers wrapped and I handed them to a homeless person on the way home. I spent the rest of the night stalking Instagram photos and thinking people wearing shorts for the race were insane and would freeze to death.

Race morning I woke up to my 5:30am, I was completely blown away by how well I slept. It was the first pre-half sleep that I slept through the entire night. I got out of bed, looked to see who the crazies were who got there when the gates opened (half expected to see Tanya walking in), grabbed my Starbucks coffee in a can, chugged it and went back to bed. Six am, the real party started.

Sprung out of bed, ate my bagel, got dressed, washed my face, did my thing… and it was only 6:05. So I went back to bed and stalked Instagram again until it was 6:30. Not only did I get a good night sleeps I was ahead of time and flying.

At 6:30 I took the elevator down and was expecting to stumble around central park until I found the bag drop off but I literally walked out the door and handed my bag to my truck. It was perfect, this hotel was so centrally located for this race it was amazing. After walking through the security check point to get into the park, I decided to walk in the opposite direction of my wave and go say hey to some of my friends in wave one (because for some reason I was in wave 2 although I was trying for a 1:40 half). After stumbling along and enjoying the sunrise I got to say hi to Tanya! Tanya (@Tc.running.lately), is training for her second marathon on April 30th. Seeing her before the race was amazing as always, it’s always amazing to see familiar faces before a race starts, it gets the jitters out being able to talk to a friend.

With ten minutes until my corral closed I walked back to wave 2, corral A, and found that I had the most amazing view of the professional women starting. I was absolutely stars truck seeing Molly Huddle, Emily Sisson, Amy Cragg, Des Linden and more! I think I fainted a little from where I was. After wave one started it felt like forever until wave two could go. But finally it was our turn.

With the blow of a horn, we were off, headed north at a blazing pace (okay 7:30 pace). We headed north towards Harlem. After hitting the three mile mark all I could think of was the hills… and then they hit me. Harlem hills, more like Harlem hell. Last year when I trained for NYC I trained in a hilly PA, this year I was primarily flat, with very small to no hills. These hills drained me. I went from my 7:30 pace to a flat 8 my legs felt heavy, but the end of the park was coming fast. We left the park and headed down 7th avenue, the energy of the city hit us like a wave a sound a suddenly the only thing I was worried about was my pace being too fast. 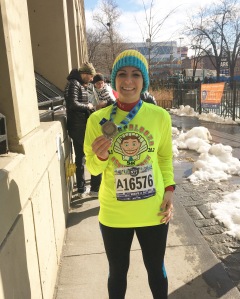 The energy of time square is amazing no matter what time it is, but now with people cheering you on the energy was even more contagious. I watched my pace go from 8 minutes down to 6:45 and realized I had to calm wayyyyyyyyyyy down. After turning on to 42nd street, and then West St, I only had to worry about keeping my pace up. That is suck a boring part to me. Three straight, flat miles with nothing really to do but focus on what you are doing. I get in my head a lot sometimes too much. And when I hit the tunnel at the 20K mark NOPE!

I am terrified of tunnels, as soon as I got in I felt like I couldn’t breathe. The walls were closing in, there were too many people. Not enough air. I started crying walking, it was never over. I knew I had to go forward, but it’s hard to move when you can’t breathe. I started sweating more than I was, I thought I was going to faint. But I kept walking, slowly. When I finally made it out of the tunnel, I didn’t have any energy to get up the last uphill. It was hard. I knew the tunnel was coming and still despite everything it got the best of me. After I walked to the top of the hill I ran the last 400 meters. It was slow. But I did it and I finished. My pace was nowhere near what it should have been.

The energy of NYC is why I run there so frequently. I love it. There is a magical feeling, there is something about running down the streets that hold so much history, so many stories. Running with 20,000 of your closest friends that you’ve never met, towards a goal of some sort. I cannot wait to do it again.