Only those who will risk going too far can possibly find out how far one can go.

Run a marathon no one asks questions, “maybe its a bucket list thing” they’ll mutter to themselves and continue with their day. Run anything further than a marathon and people will be wondering what your running from, and why.

“I never ran a thousand miles. I could never do that. I ran one mile a thousand times.”

Labor Pains is a 12 hour race, with a 5 mile looped course, which I will explain a little later. From 7:30 am to 7:30 pm you can do whatever you want. Run, walk, crawl, drink, eat. Hell, there is so much to do at camp, sometimes I wonder how people remember to run.

Over 300 crazy runners gather to challenge themselves with there personal impossible distance. For some this distance is 10 miles, for other the marathon, for the most extreme, 75-100 miles. For me, I focused this year on the best 50k time I could. I ran 40 miles last year and really messed up my body for the Philadelphia marathon as I was knocked out of training for weeks due to hip and knee pain.  This year with NYC on my mind I was not about to mess things up. I kept my impossible distance to something that would challenge me, but at the same time I knew I could handle. 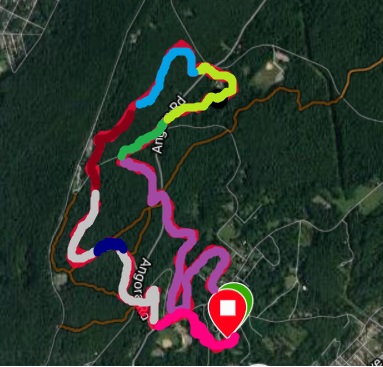 Above is the Labor Pains course in Reading Pa. each color on the trail is a section I have my own nickname for.

Purple AKA Veggie Burger: The beginning does not start you off easy at all, its a series of single lane trail which is mostly uphill. As weird as it sounds I nicknamed this section veggie burger, when the miles get higher and it gets tougher to run, this is where I start my fueling.

Green AKA Pothole downhill: To get to the green section you have to climb over a small rock wall, and then its all down hill on a pothole ridden road. After all the uphill, this is the downhill section that dreams are made of.

Yellow AKA Welcome to the jungle: This section is tall grass and dense trees. If it rains the mud on this section will eat you alive. You also pass Camp Lilly which is the haven when you know the beer stop… I mean aid station… is just ahead.

Light Blue AKA winding woods: One of the most boring parts of the trail. A wooded winding area, sometimes it feels uphill, others it feels downhill. This section can be the best or the worst, but there is no in between.

Dark red AKA TRASH MOUNTAIN!: This is by far the best and the worst section of trail. Trash mountain is your last uphill before the 2 mile decent, and its awesomely sucky. At the highest point someone at one point dropped all of there trash, therefore earning the name trash mountain in my book.

Gray Blue Gray AKA DOWN HILL FROM THE GODS:  After a climb this downhill is luxurious, well except for that blue part, thats the devils down hill. It is shear rock which will get so slippery if your not paying attention you will go down. but then it is back do trail down hill.

Hot pink AKA Rock wall of death: Most of this homeward bound section is down hill and on road or on hard grass… but, once you get to the guard rail and hop it (yes you read that right) you have to climb a rock wall. Over time, it does not get any easier.

The real purpose of running isn’t to win a race. It’s to test the limits of the human heart.

Recently I read a quote from someone that compares running an ultra to a year in your life because of how many emotions you go through during the race.  “what do you think about when you run?” is the most common question I get, and let me tell you, everything. I think about the way I breathe, nature around me, what I’ll have for dinner, the fuel efficiently of my car, how to solve world hunger. I think about nothing and everything all at the same time.

This ultra was no different.

My impossible distance leaves me time to reflect on everything and everywhere my training has took me thus far in my year. As I crept up on my 15 mile distance I realized I felt strong and confident, I was further into my training this year than in previous years and I felt as if I could go forever. I was taking the downhills faster than I could have imagined, and I was taking the uphill like a champ.

And then when I got comfortable, it happened. I wasn’t paying attention stumbled on a downhill section and twisted my ankle. It hurt, I cursed, I yelled out loud and got mad at myself, but not once did I stop.

Run when you can, walk if you have to, crawl if you must; just never give up.

At the 20 mile mark I got back to camp and hated my life. My ankle hurt so badly, I was seconds away from tears. It was suggested to me that I not push myself to the 31 mile mark, but being the resilient pain in the ass, never giving up, running through the pain, person that I am, I snarkily replied with “its only ten more miles”. Without warning or telling anyone what I was doing, I headed out after grabbing a Twizzler and eating it like I was pulling meet off a leg bone.

My 5th loop was not my proudest, I walked a good amount of the first mile, tried to run the uphills and it wasn’t working for me. Finally I saw an opportunity for distraction. A former coworker of mine, Berni,  was running with team RWB and I saw her up in the distance, caught up to her, and started catching up on life.

This distracted me through Trash Mountain and gave me enough hope and positivity. I left Berni at the beginning of Downhill from the Gods with a promise that I would catch up with her later, a promise I never fulfilled.

You have to wonder at times what you’re doing out there. Over the years, I’ve given myself a thousand reasons to keep running, but it always comes back to where it started. It comes down to self-satisfaction and a sense of achievement.

When I got back to camp I realized I was on my 6th and final full loop. I sat down for a second, grabbed a water and some gushers (my weird go to running snack), and realized I was starving. I looked to grab a veggie burger, but there was none left. In a huff, said screw, and went off.

At the aid station I took two beers and chugged them, I earned them. The aid station was keeping track of my laps better than I was and they were cheering me on. It was a fantastic feeling knowing I only had about 5 miles left at that part. After Trash Mountain, it was an all out run, everything I had left I poured into these last few miles.

When I got back to camp I briefly checked in and without stopping I headed out to finish my last mile. Once I got to the turn around spot I was running back past people as they headed out on there laps. I felt like I was cheating and quickly considered continuing on, but my ankle reminded me that I should probably stop.

With Cheers of fellow runners I ran my last half mile back to camp. One guy yelled at me to “reassess my long distance” I took that as in he did not like that I was stopping at the 50k, but it was warranted.

I hobbled across the line with a smile on my face. I was happy with the effort that I put in, it was the best 50k time I had done.