With the sun beating down on us with the intensity of hot oil frying french fries we did whatever we needed to keep cool. “Dump water on your heads and down your back, everybody, just do it.” A veteran of racing yelled at us while getting water. Everyone was drenched with sweat, not even the volunteers had a dry spot on them; glistening shiny bodies all moving forward with relentless determination. It was in that moment no one cared if I was wearing a crop top, if anything they were jealous.

For as long as I can remember I’ve always had a touch of body negativity. I’m not someone with the flattest stomach, prettiest abs or  the perfect hourglass figure. Ice cream is my favorite food, tacos are a close second so its no wonder why I don’t fit the stereotypical runner body. Seriously I am fine with not fitting the stereotype, but I really get jealous of those cute crop tops that those skinny stick figures wear. 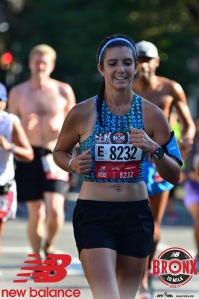 I love crop tops,  in theory, but in practicality I am terrified as hell to wear them. I have love handles, people are not meant to see them! Those bulging side pockets are pieces of skin that should be hidden away and not shown to anyone under any circumstances.  When clubs or company’s offer really cute crops I always opt for the singlet, but secretly always lust for those small sport bra-ish piece that makes anyone look super fast.

Earlier this year I bought two high necked sports bras that could be worn by themselves. I got out the door with a tank top over it, and took my shirt off for a track workout. That was the first time I was finally running in a crop! Until someone else showed up at the track where I PRed my sprint over to my shirt so I could cover my naked sweating stomach.

At the running store that I work at all of the coworkers are super close and we love to spend each others money. We received this mermaid looking crop top in from Saucony and I was talked into, that I needed it. I planned to makes its debut at a 5k, I chickened out. Next I thought why not for the fifth avenue mile, again no go. I could not back down from wearing it at my next race, also I couldn’t face Shelby at the store and tell her that I chickened out again for sheer embarrassment from her.

On September 24 the Bronx 10 miler was scheduled to start at 8am. At start time it was already in the 70’s. It was hot. As I stepped out of the car wearing my crop and my favorite black racing shorts I felt self conscious.

“You know what on second thought, I’m actually pretty cold, I think I’ll wear a T shirt” I said to the inhabitants of the car.

“Get” was the response, with the brevity of telling a dog to leave whatever they were sniffing at.

My silver and pink belly button ring stuck out from under the crop, so I covered it with crossed arms. Leaving the Parking garage women passed me wearing smaller sports bras than the crop that I had on. They kept their heads high, shoulders back and arms relaxed as they laughed and joked with those they were walking with. I could do this. 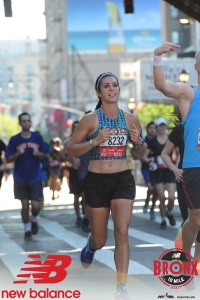 As we lined up for the race the heat started to get to me. They announced over the loud speaker “No Olympic records today, its hot!”. Just standing there I could feel the sweat dripping down my back. I looked around, people who were wearing full tanks or t shirts were already starting to change colors especially the grays. I still kept crossed arms, while waiting for the start, I swear I could feel people judging me, saying things behind my back, pointing out my love handles and rounder stomach.

As the race started I dropped my arms and began my race. It was hot, I was sweating so was everyone around me. We ran straight down Grand Concourse. As I grew tired from the heat and started throwing water on myself I realized no one cared what I was wearing. No one probably even looked twice, its a race and it was hot, it was completely acceptable to wear what I was wearing.

Half way in I realized I didn’t even care that I was scantily clad, but in retrospect if I wore this in Brooklyn I am pretty sure the Hasidic community would have fainted on site. I was free, I was not worried about what I was wearing, if anything it was better than wearing a tank top or a t shirt because it was so tight on my body I knew exactly where it was.

Due to the PR crippling, dashboard cookie making, people passing out heat that we had I did not run my best race. I did not PR, in fact I was almost 20 minutes off from my previous years time, but that is okay. This race was not about setting PR’s or qualifying for anything, this race was getting comfortable in my own skin.

Between the 15,000 people lined up like sardines and the intense heat that shone down on us no one cared what I was wearing. Even if it wasn’t as hot as the Mojave desert I am pretty sure still no one would have cared. Truth be told, who cares. I ran my race comfortably, minded my own business (for the most part) and no one died. 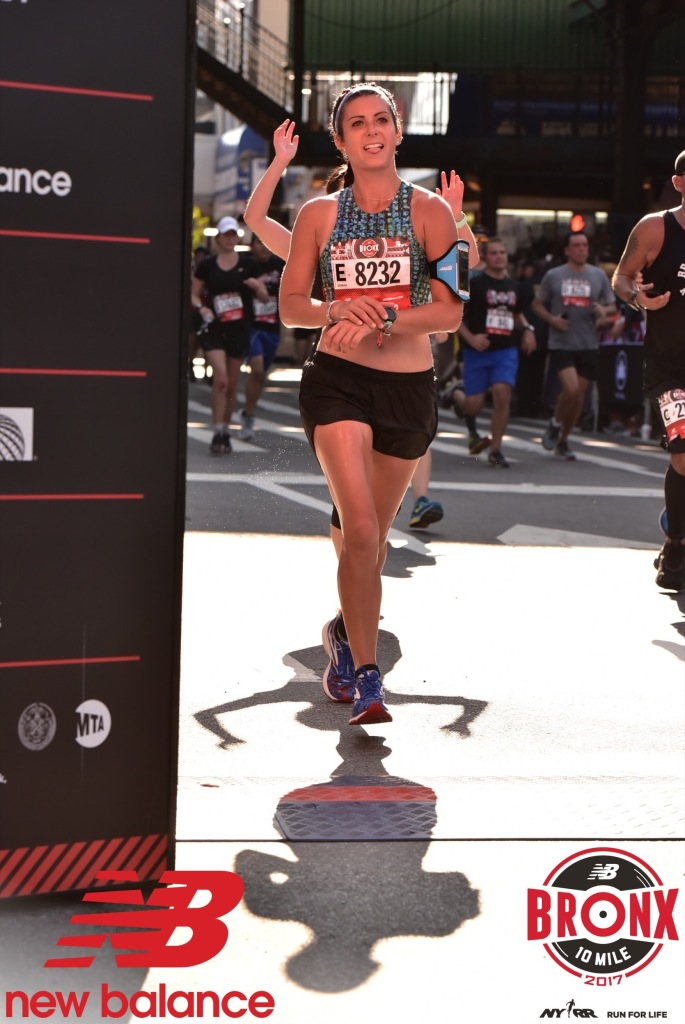